Authors of "Shattered: Inside Hillary Clinton's Doomed Campaign" to Speak at RNLA Luncheon on Friday in Washington, D.C.

Posted by Republican National Lawyers Association (RNLA) 0sc on May 15, 2017 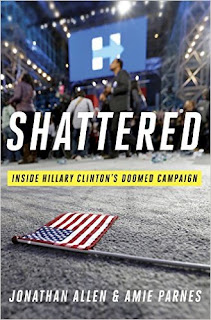 This Friday, May 19, the RNLA will be hosting a luncheon in Washington, D.C., featuring Jonathan Allen and Amie Parnes, authors of the bestselling book Shattered: Inside Hillary Clinton's Doomed Campaign.

According to a National Review article reviewing the book, Shattered is "absolutely gripping reading, chock full of juicy, revelatory reporting about the Democratic nominee’s campaign that you really wish you had read during the actual campaign."

Allen and Parnes, through access from insiders on the Clinton campaign, explain missed opportunities on the campaign trail and other political misfires that turned from what looked like a winnable race, to a devastating loss.  They even explain how Team Clinton's public appearance was extremely different behind the scenes, stating:

Over the course of a year and a half, in interviews with more than one hundred subjects, we started to piece together a picture that was starkly at odds with the narrative the campaign and the media were portraying publicly.  Hillary’s campaign was so spirit-crushing that her aides eventually shorthanded the feeling of impending doom with a simple mantra: We’re not allowed to have nice things.

Of course, the media failed to mention the infighting of the campaign, which is one of the reasons why America seemed so stunned that President Trump overwhelmingly won on Election night.  The RNLA looks forward to hearing first-hand from Allen and Parnes how and why Clinton lost, and other insights from their book Shattered.