The New York Times today did something it never does: it mentioned vote fraud in a headline (see picture, we are not going to link to the “story”).  Of course, the story has nothing to do with vote fraud or the integrity of the election.  The New York Times has a long history of ignoring vote fraud, and instead the purpose of the story was to scare African Americans that their vote is being taken away from them.  Ironically, while the story focuses on the alleged bigotry behind the voting laws in Georgia, The New York Times ignored the actually anti-Semitic bigotry of Georgia Democrat Congressman and Super delegate Hank Johnson last week. 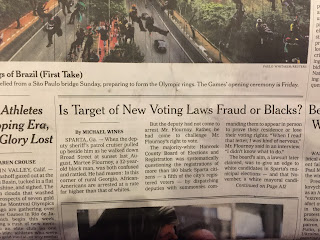 We thought we would take a moment to list some of the actual vote fraud that has happened in New York that has been completely ignored by The New York Times:

Hard to Tell Where the Incompetence Ends and the Fraud Begins

We can go and on.  We could even list the vote fraud in New York by famous New Yorkers such as Al Sharpton and Geraldine Ferraro if we went back further.  Vote fraud is rampant in New York and instead of covering it, The New York Times goes to Georgia in an apparent effort to scare voters nationwide.  Shame on the Times.