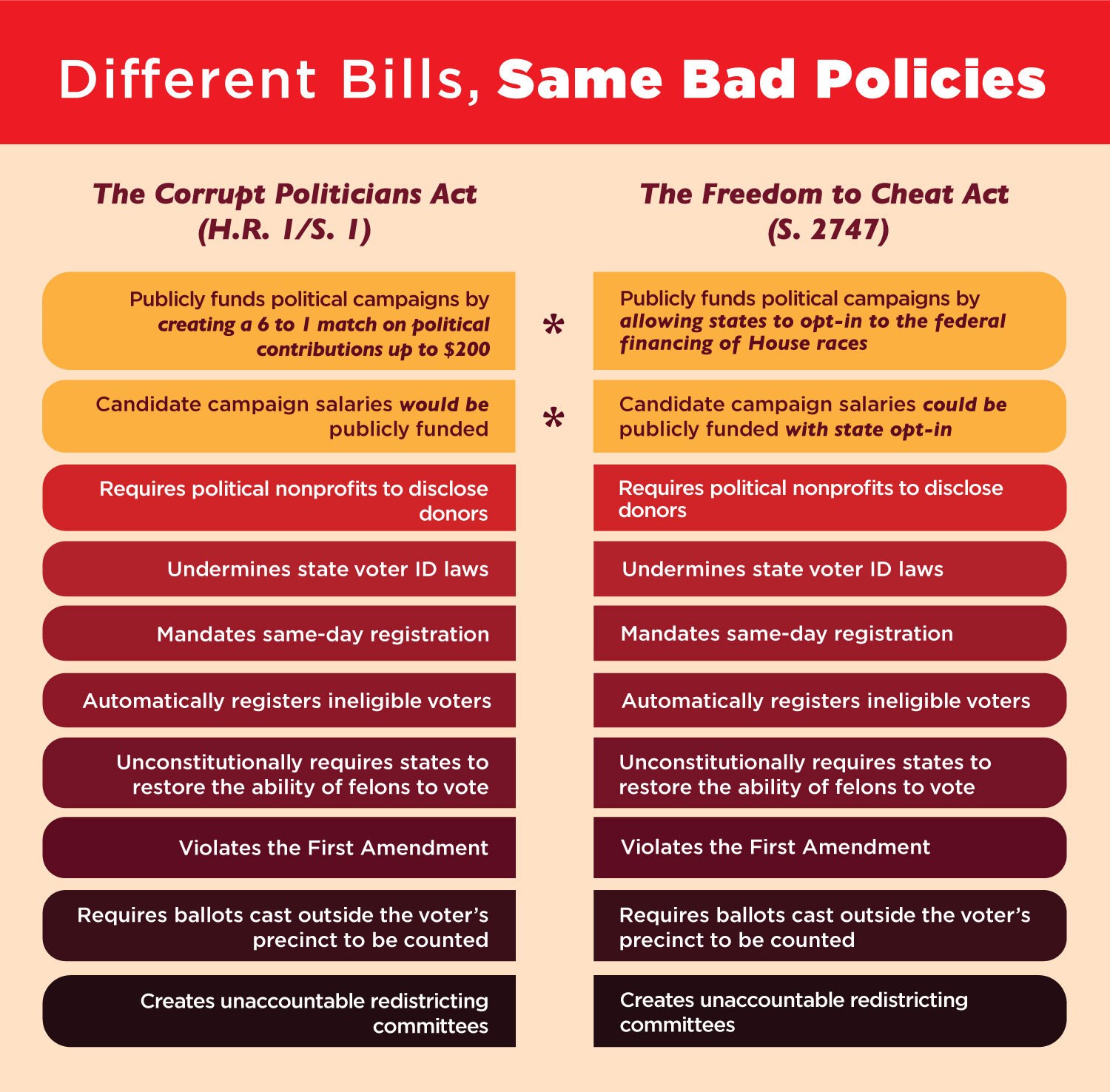 The Freedom to Cheat Act: A compromise between the Left and the far Left

After the failed S. 1 effort, the Democrats' latest effort at a federal takeover of our elections, the incorrectly named “Freedom to Vote Act, was described by Senate Republican Leader Mitch McConnell thusly:

No amount of repackaging or relabeling will let Democrats sneak through big pieces of the sweeping, partisan, federal takeover of our nation’s elections that they have wanted to pass since they took power.

Seemingly every few weeks, Democrats take another run at this. This week’s latest ‘compromise’ is just a compromise between the left and the far left. It’s the product of Washington Democrats negotiating with each other about how much power they should grab. It contains many of the same fatal flaws as their previous attempted takeovers that have already fallen flat. . . .

We will not be letting Washington Democrats abuse their razor-thin majorities in both chambers to overrule state and local governments and appoint themselves a national Board of Elections on steroids.

Why Manchin Has to Vote Against H.R. 4

After passing the House last week with no Republican support, H.R. 4's next stop is the U.S. Senate. Democrats in the Senate need all the support they can get to pass H.R. 4, and at the center of this effort is the vote of Democrat Senator Joe Manchin. And as it stands now, Joe Manchin has no choice but to vote "no" on H.R. 4 based on his prior statements.

With Congresswoman @RepTerriSewell and Judiciary Committee Chairman @RepJerryNadler’s leadership, Democrats are fighting back against an anti-democratic tide and protecting access to the ballot box for every American. Read my full statement here: https://t.co/BK6RFpBv6J

History Lesson on Voting Rights: It 's Not 1965

While the public is rightly focused on the Biden administration's disastrous withdrawal from Afghanistan, House Democrats chose again to focus on their own reelections. Today, it was a hearing on H.R. 4, the so-called John Lewis Voting Rights Advancement Act. The only problem: the bill contains no text for the committee members to even review:

The House Judiciary Com. meeting now about a bill that has no text & of which we have no idea what text it is going to contain. We agree John Lewis was a hero, but a bill in his name is not helpful to Voting Rights if it does not truly deal with Voting rights in 21st Century

.@Jim_Jordan points out this is last time to talk about legislation that we don't even have the bill on! It is outrageous that Democrats are having hearings and a VOTE on a bill that members of Congress have not seen!

The Senate Democrats are at it again. After a marathon session of voting on amendments to the infrastructure package, Majority Leader Chuck Schumer attempted to force a vote on a series of bills that would facilitate a federal takeover of elections including the Corrupt Politicians Act. But as The Houston Chronicle reported, Senator Ted Cruz repeatedly objected to the motions:

In a back-and-forth with Majority Leader Chuck Schumer on the Senate floor around 3:30 a.m., the Texas Republican objected repeatedly as the New York Democrat sought consent for the Senate to consider a series of voting bills. Cruz denounced the legislation as “a federal government takeover of elections” and a “massive power grab by Democrats.”

Senate Dems Hit the Road in Their Quest to Federalize Elections

Earlier today, Senate Rules Democrats took their "phony hysteria" about state election laws "on the road" and held a field hearing in Atlanta, Georgia. The hearing was Democrats' latest stunt in their quest to enact a federal takeover of elections. As Republican Leader Mitch McConnell pointed out:

“Democrats’ fake outrage may have driven jobs and opportunities out of the state of Georgia, but I’m sure Georgians will appreciate that Democrats are bringing their own partisan circus to town instead.