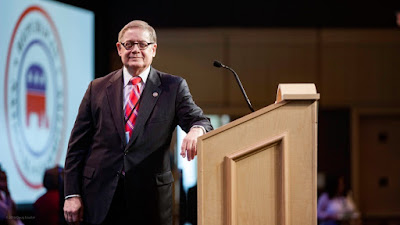 The Board of Governors of the Republican National Lawyers Association is pleased to announce the selection of John Ryder as the 2016 Republican Lawyer of the Year. This award recognizes lawyers for outstanding professional accomplishments and years of dedicated service to the Republican Party and its ideals.

Mr. Ryder will be presented the award at a special reception in his honor on September 27 at the Capitol Hill Club in Washington, D.C.  More details on the reception may be found here.  Photos from our 2015 Republican Lawyer of the Year Reception honoring Bobby Burchfield and featuring Senate Majority Leader Mitch McConnell and RNC Chair Reince Priebus can be found here.
John Ryder has served the Republican Party in a variety of ways. He has been Chairman of the Shelby County Republican Party and served on the Tennessee State Executive Committee from 1986 to 1996 and from 2002 to 2014.
In 1996, he was elected to the Republican National Committee from Tennessee. He brought with him over two decades of experience litigating redistricting cases in Tennessee, the cradle of one person, one vote. On the RNC, he was appointed to the Redistricting Task Force in 1997 by Chairman Jim Nicholson. Ten years later, he was asked to Chair the Redistricting Committee of the RNC by Chairman Michael Steele.
Perhaps more importantly, John has been a leader in the area of the Rules of the Republican Party. He served on the RNC Standing Committee on Rules from 1996-2004 and from 2008-2016. He has served on the Convention Rules Committee in 2000, 2004, 2008, 2012 and 2016. He served as a member of the Temporary Delegate Selection Committee in 2008-2010, a committee which helped develop and refine the presidential nominating system.
In 2013, Chairman Reince Priebus appointed John as General Counsel of the RNC, a position he still holds. The RNC General Counsel is a volunteer position. Given the challenges of the past year, this means that John has donated countless hours to the Republican Party.
Additionally, he has been a delegate to the Republican National Convention in 1984, 1996, 2000, 2004, 2008, 2012 and 2016 and as an alternate in 1992. He was a Presidential Elector in 1988 and 2004.
He is a member of the Board of Governors of the RNLA.
John is a member of the adjunct faculty of Vanderbilt University School of Law, where he teaches Election Law.
John is a member of Harris Shelton Hanover Walsh in Memphis, Tennessee, where his everyday practice is concentrated in the areas of commercial litigation and bankruptcy. Mr. Ryder has represented secured lenders, unsecured creditors committees, trustees and debtors in the bankruptcy process. He has served as trustee and receiver. He has participated in a number of major bankruptcies, including The Julian Companies, Microwave Products, Wexner & Jacobsen, FCS, Braniff and others. He is a frequent lecturer on bankruptcy and commercial law topics.
Mr. Ryder served as Shelby County Assistant County Attorney from 1978 to 1990 and from 1994 to 2014. He edited the Laws of Shelby County Annotated, the first compilation of Private Acts affecting Shelby County. He served as Delinquent Tax Attorney for Shelby County from 1990 to 1994, and he served as member of the Shelby County Home Rule Charter Commission and presently represent the Shelby County Election Commission.

Dems Will Cast Doubt on Elections Until They Get Their Way

During a live-streamed interview on Tuesday, Democrat House Leader Steny Hoyer echoed President Joe Biden's position that the 2022 midterm elections could be "illegitimate" if Democrats fail to pass their...