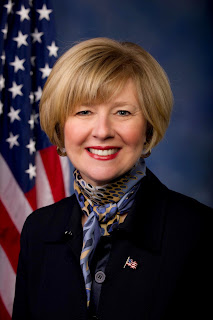 The RNLA is pleased to announce that Congresswoman Susan W. Brooks (R-IN) will be one of our featured speakers for the 2015 National Policy Conference.  She currently serves on the House Energy and Commerce Committee, the House Ethics Committee and the Select Committee on the Events Surrounding the 2012 Terrorist Attack in Benghazi.

After receiving her undergraduate degree from Miami University of Ohio, Susan pursued a Juris Doctor (J.D.) from the Indiana University Robert H. McKinney School of Law. In May of 2013, Susan was awarded an honorary Doctor of Public Service degree from Marian University in Indianapolis.

Recently, Brooks has been making waves since serving on the Select Committee on the Events Surrounding the 2012 Terrorist Attack in Benghazi.  She is the only freshman on the panel, and one of only two who doesn't serve on any of the four House committees that have already investigated the attack.

"I do think it's a good thing to have some fresh perspectives," Brooks said in an interview with IndyStar.com.  "Maybe some different questions, or maybe a different manner in which we ask the questions will produce some answers."

For more information on the RNLA’s 2015 National Policy Conference and to register, please visit our events page here.