As the principal national organization of Republican lawyers, the Association has a targeted set of missions - all complementary, and none of which duplicate missions accomplished elsewhere. Each member of the Association and every local chapter must ascribe to the accomplishment of these missions, which include:

"The RNLA is at the tip of the spear for our party in courtrooms and polling places all across the country. You ensure that Republicans get a fair shake and that Democrats, hard as this may be for them, play by the rules. When [a] Republican campaign needs a legal brief drafted at 3:00 AM on election night, they call you in their home states." 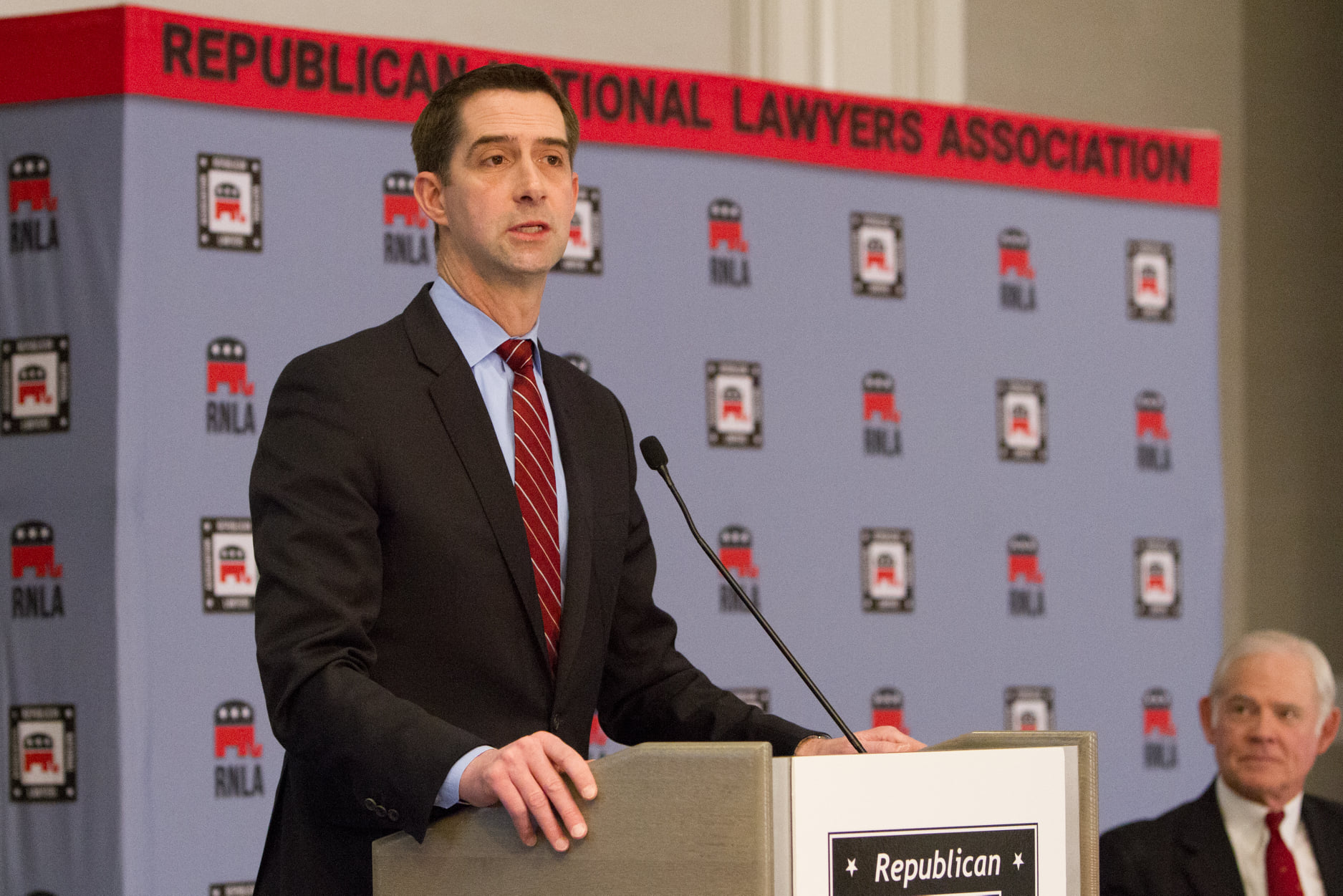 A Short History of the RNLA

Led by Bob Horn and with the blessing of Attorney General Ed Meese and RNC Chairman Frank Fahrenkopf, the Republican National Lawyers Association (RNLA) was founded in 1985. It was founded in part to continue the 1984 presidential election’s “Lawyers for Reagan-Bush” effort for which Horn served as Executive Director.  Early leaders of the RNLA included future Chairman of the Consumer Product Safety Commission Nancy Nord, former National Labor Relations Board Chair Betty Murphy, and Professor Robert Freer, among other leading Republican attorneys.

Since 1988, the RNLA hosted events for Republican lawyers at the annual Republican National Convention.  One of the RNLA’s earliest supporters was Senator Orrin Hatch, who stated: “If you are a Republican and a lawyer, you need to be a member of the Republican National Lawyers Association.”  Initially, the RNLA was mostly DC-focused, but did feature leading lawyers around the county.  Its leaders played key roles in Lawyers for Bush-Quayle, Dole-Kemp, and Bush-Cheney.

In the months before the 2000 election, the RNLA hosted receptions for lawyers in Florida.  Many of the attendees would play important roles on the ground in the effort to confirm President George W. Bush’s 2000 Election victory.   Not just Florida members but many current and former RNLA members played crucial roles, such as Ted Olson and George Terwilliger.

The RNLA’s mission is fourfold, with election integrity only one part.  The RNLA is also a recognized leader in advancing professionalism, which it does via continuing legal education events such as its annual National Policy Conference and National Election Law Seminar.   The RNLA serves to advance the careers of its members, including former members such as Chief Justice John Roberts, Arkansas Attorney General Leslie Rutledge, House Judiciary Chairman Bob Goodlatte, and White House Counsel Don McGahn.  Lastly, the RNLA seeks to advance Republican ideas, which it does through its social media accounts but also through efforts to promote respect for the rule of law.  As part of this mission, the RNLA is currently working hard to support the confirmation of President Trump’s outstanding judicial nominees.

The RNLA continues to stand out as the home for Republican lawyers.  Below are a few highlights of the last 20 years.

In 2000, the RNLA established its National Policy Conference as an annual spring event for the first time; prior to then, the RNLA only hosted occasional conferences. Today, the conference serves as gathering of Republican lawyers from across the country to hear from leading Republican and conservative thought leaders, lawyers, policy-makers, and politicians.

In 2001, the RNLA began to formalize its efforts to advocate for the confirmation of judicial nominees in light of Senate Democrats’ efforts for the first-ever filibuster for the purpose of obstructing judicial nominees.  One of the early leaders of this effort was now-Justice Neil Gorsuch.

In 2002, the RNLA began its efforts to ensure open, fair, and honest elections through events such as the National Election Law Seminar.  The National Election Law Seminar became an annual summer event that attracts the leaders in election law from the Republican side and has also featured President Obama’s campaign lawyer and White House Counsel Robert Bauer and liberal Professor Daniel Tokaji from Ohio State University’s Moritz College of Law.

In 2003, the RNLA bestowed the first “Hon. Edwin Meese III Award” on the award’s namesake. This annual award, the RNLA’s highest honor, is given “to an individual who has upheld the rule of law in the face of adverse political challenges.”

In 2004, the RNLA inaugurated the now annual “Republican Lawyer of the Year” award, which is given to a “lawyer for his or her outstanding professional accomplishments and years of dedicated service to the Republican Party and its ideals.”

In 2005, then-Vice President Dick Cheney said of the RNLA:

“The RNLA has stood firm for honesty and fairness in the election process, has trained thousands of lawyers in the details of election law, and has built an outstanding network of skilled attorneys from one end of the country to the other.”

“We really appreciate what you all have done on our judges.  To think that this President has appointed 27% of the members of the Federal Judiciary and most of all he has been able to appoint such terrific individuals to the U.S. Supreme Court, John Roberts and Sam Alito will serve for decades with distinction and integrity.”

“I like to think of the RNLA as a little bit of a secret weapon. You don’t often make the newspapers.  You’re not on the cable news shows 24 hours a day.  But you, the people in this room, have dramatically affected the course of our nation . . . for the better. . . . You’ve grown from a small group of attorneys who gathered largely for networking . . . into a potent, sophisticated political force.”

In 2009, the RNLA celebrated its 10th annual National Policy Conference and began a tradition of a showcase panel featuring state attorneys general.

In 2010, the RNLA celebrated its 25th Anniversary with a gala event at the Willard hotel featuring leading Republican political figures and lawyers.

In 2011, RNLA leaders testified in front of the Senate Judiciary Committee’s Subcommittee on The Constitution against the ongoing effort of Democrats and liberals to limit speech.

In 2012, the RNLA created the “Betty Murphy Award,” given each year to “an unsung hero, member, trailblazer, with entrepreneurial spirit, a community service leader, an organization builder who inspires others' efforts.”

In 2013, former RNLA First Vice President Lee Goodman was confirmed as a commissioner on the Federal Election Commission.

In 2014, the RNLA’s response to the Presidential Commission on Election Administration received bipartisan praise.  The RNLA continued its work to ensure elections are open, fair, and honest for all.

In 2015, the RNLA created its ballot access project and welcomed future White House Counsel Don McGahn to its Board of Governors.

In 2016, the RNLA helped to organize and train hundreds of lawyers in key states across the country who held ensure that the election with President Trump’s historic victory was open, fair, and honest.

In 2019 for the last time during his lifetime RNLA Founding Chair Bob Horn presented the “Robert J. Horn Chairman’s Award,” first presented in 2017.  This award is presented to individuals for “nationally distinguished service to the citizens of the United States of America for protecting the honesty and accuracy of elections.” It is presented in honor of the Founding Chairman, who succeeded in significantly advancing the integrity of elections throughout his professional lifetime by founding and promoting the Republican National Lawyers Association.

In 2020 five members of RNLA were selected to be part of the “Lawyers for Trump” national leadership.  Headed by Co-Chairs Harmeet Dhillon and Stefan Passantino, RNLA had more representatives on the Board than any other group.

In 2021 RNLA formerly institutionalized its highly popular national webinars into a bi-weekly format.  These webinars were instituted during the COVID-19 pandemic when in-person meetings were impossible.  Speakers over the years have included Members of Congress, leading political figures, Governors, authors, and legal scholars.