"Let me repeat what I have repeated for many months now," [Hillary] Clinton responded. "I never received nor sent any material that was marked classified."

Except that Clinton did, then she lied about it. Not just once, but on several occasions. That is now established as an indisputable fact.

"While I respect the law enforcement professionals at the FBI, this announcement defies explanation," Ryan said in a statement. "No one should be above the law."

Even as Comey announced that "no reasonable prosecutor" would bring the case against Clinton, Ryan remarked that even "based upon the director's own statement, it appears damage is being done to the rule of law."

"Declining to prosecute Secretary Clinton for recklessly mishandling and transmitting national security information will set a terrible precedent," Ryan continued. "The findings of this investigation also make clear that Secretary Clinton misled the American people when she was confronted with her criminal actions. While we need more information about how the Bureau came to this recommendation, the American people will reject this troubling pattern of dishonesty and poor judgment."

National Review put out a piece that sums up the clear legal issues evidenced in Comey’s statement.

In essence, in order to give Mrs. Clinton a pass, the FBI rewrote the statute, inserting an intent element that Congress did not require. The added intent element, moreover, makes no sense: The point of having a statute that criminalizes gross negligence is to underscore that government officials have a special obligation to safeguard national defense secrets; when they fail to carry out that obligation due to gross negligence, they are guilty of serious wrongdoing. The lack of intent to harm our country is irrelevant. People never intend the bad things that happen due to gross negligence.

It seems to me that this is what the FBI has done today. It has told the public that because Mrs. Clinton did not have intent to harm the United States we should not prosecute her on a felony that does not require proof of intent to harm the United States. Meanwhile, although there may have been profound harm to national security caused by her grossly negligent mishandling of classified information, we’ve decided she shouldn’t be prosecuted for grossly negligent mishandling of classified information.

Even the liberal Washington Post thought the issues were serious and headlined their story on it Hillary Clinton’s email problems might be even worse than we thought:

It's hard to read Comey's statement as anything other than a wholesale rebuke of the story Clinton and her campaign team have been telling ever since the existence of her private email server came to light in spring 2015. She did send and receive classified emails. The setup did leave her — and the classified information on the server — subject to a possible foreign hack. She and her team did delete emails as personal that contained professional information.

Those are facts, facts delivered by the Justice Department of a Democratic administration. And those facts run absolutely counter to the narrative put forth by the Clinton operation: that this whole thing was a Republican witch-hunt pushed by a bored and adversarial media.

For a candidate already badly struggling on questions of whether she is honest and trustworthy enough to hold the office to which she aspires, Comey’s comments are devastating. Watching them, I could close my eyes and imagine them spliced into a bevy of 30-second ads — all of which end with the FBI director rebuking Clinton as “extremely careless.”

RNC Chair Reince Priebus via a statement on Facebook: 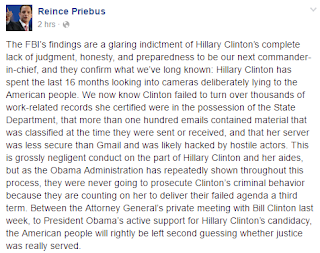 Hillary may have avoided criminal prosecution but she will be made to pay a political price.