Join the RNLA Michigan Chapter for a special Legislative Reception featuring Speaker Lee Chatfield of the Michigan House of Representatives in Lansing on June 5th. 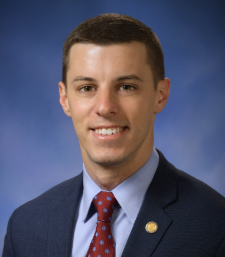 To attend, please RSVP in advance with the form below.

As a lifelong Northern Michigan resident and active member of his community, Lee Chatfield knows exactly what issues people care about, and he has the energy and courage to fight for those shared values. Chatfield, of Levering, is currently serving his fifth year in the Michigan House of Representatives and proudly represents the people of Cheboygan, Chippewa, Emmet and Mackinac counties.

The same work ethic he learned from his parents, Betty and Rusty Chatfield, and as an athlete and coach, also helped him become one of the youngest ever Speakers in Michigan history. Serving in this leadership position allows him to make an even greater impact for Northern Michigan and the Upper Peninsula.

Faith has always been an important part of Lee Chatfield’s life. Lee's father has been a minister in Pellston and Burt Lake for more than 30 years, and Lee graduated high school from Northern Michigan Christian Academy.  Sports also has played a big role in his life. While earning a bachelor’s degree at Northland International University, Lee was named a 1st Team Adidas All-American for soccer and continues to use his collegiate experience as a player to impact the next generation through coaching and mentoring. After graduating from Northland, Rep. Chatfield earned a master’s degree in public policy from Liberty University.

Before his election to the Michigan House of Representatives in 2014, Lee served as a full-time high school teacher, coach and athletic director at his alma mater, Northern Michigan Christian Academy. Lee married his high school sweetheart, Stephanie, and they have four sons and one daughter. When Lee first decided to run for the state House, he wanted to make sure he ran a campaign that was focused on the issues and told people the truth.