The Real Cause of the 2008 Financial Crisis 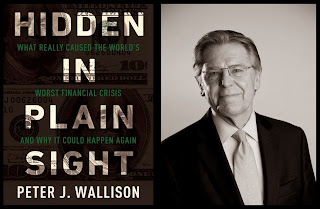 In a new book out by AEI scholar Peter J. Wallison titled "Hidden In Plain Sight: What Really Caused the World's Worst Financial Crisis and Why It Could Happen Again" suggests that the US’ lack of regulation of housing policies played a crucial role in the financial crisis of 2008.

In a Q&A with AEI Wallison explains that there is still widespread belief that it was the banks and the private sector that caused the financial crisis, and to combat that myth is the reason that he wrote “Hidden In Plain Sight.”

Wallison evidences that by 2008, before the financial crisis, there were 55 million mortgages in the US. Of these, 31 million were subprime or otherwise risky. And of this 31 million, 76% were on the books of government agencies, primarily Fannie and Freddie. This shows where the demand for these mortgages actually came from, and it wasn’t the private sector. When the great housing bubble (also created by the government policies) began to deflate in 2007 and 2008, these weak mortgages defaulted in unprecedented numbers, causing the insolvency of Fannie and Freddie, the weakening of banks and other financial institutions, and ultimately the financial crisis.

Having a Republican Congress, according to Wallison, improves the chances of eliminating the government’s involvement in the housing finance system. This would permit the creation of a stable mortgage system based on sound underwriting standards. However, in light of his most recent action, it seems unlikely that President Obama would agree to a reform of this kind. Much depends then on the election of a Republican president in 2016. If that occurs, Wallison thinks the record of the government’s activities in the housing market makes a strong case for returning over time to a completely private system.

On Thursday, March 12, please join the RNLA for aconference call featuring former RNLA Board Member and White House Counsel to Ronald Reagan, Peter Wallison. To RSVP for the conference call, where you may have the chance to ask Mr. Wallinson questions regarding his new book or the financial crisis, email[email protected].