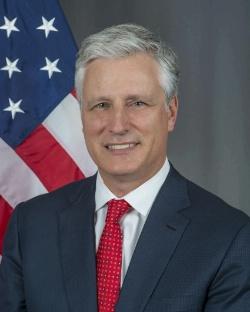 Join the RNLA for a special webinar and exclusive briefing with former U.S. ambassador and the 28th National Security Advisor, Robert O’Brien.

Ambassador O'Brien will share his insights on the current state of foreign affairs and national security today in contrast to his time serving as President Trump's National Security Advisor.

Ambassador Robert O'Brien served as the 28th United States national security advisor from 2019 to 2021. Prior, he served as the Special Presidential Envoy for Hostage Affairs, where he earned the rank of Ambassador. O'Brien was also a major in the Judge Advocate General's Corps of the United States Army Reserve. From 1996 to 1998, O'Brien was a legal officer with the United Nations Compensation Commission in Geneva, Switzerland. O'Brien was named co-chairman of the U.S. Department of State's Public-Private Partnership for Justice Reform in Afghanistan in 2007. He continued in this role during the first term of the Obama administration. O'Brien was a founding partner of the Los Angeles boutique law firm Larson O'Brien LLP in 2016.

This webinar is a special benefit for RNLA members only. To participate, please become an RNLA member at www.rnla.org