Dozens of House Republicans are urging the Senate to oppose President Biden's nomination of David Chipman as director of the Bureau of Alcohol, Tobacco and Firearms (ATF), calling him an "enemy of the 2nd Amendment" and saying his confirmation would "jeopardize" the constitutional rights of gun owners. . .

In the letter, the GOP members described Chipman as a "longtime gun control activist and lobbyist."

"His beliefs and hostile attitude toward the rights of gun owners are well known," the wrote. "Thus, we respectfully ask that you oppose his confirmation."

David Chipman's beliefs & hostile attitude toward the rights of gun owners are well known and should disqualify the long time gun control activist and lobbyist from the position of ATF director.

RSC is leading the charge against his Senate confirmation.https://t.co/RCRXQvX6Ii

President Biden’s ATF nominee has a long history of anti #2A activism.

I joined @RepJimBanks in a letter urging the Senate to oppose David Chipman's nomination. pic.twitter.com/WwjfUdbKIW

Even prior to the House GOP's letter, concerns were raised about Chipman. Almost immediately after his nomination, comments surfaced of Chipman mocking gun owners in 2020:

During an interview with Cheddar in April last year, gun control activist David Chipman, who was nominated Thursday to the executive post at ATF, said those purchasing firearms put “themselves and their families and danger.” Chipman also compared them to Joe Exotic, the Oklahoma zookeeper profiled on Netflix’s “Tiger King.”

“Most of the new buyers who went out to the gun store and bought a gun have no training whatsoever,” Chipman said. “In their mind they might be competent, they might think they’re die-hard and ready to go, but unfortunately they’re more like Tiger King.”

Chipman’s recommendation as a longtime government bureaucrat who served 25 years at ATF was for new gun owners to “secure that gun locked and unloaded and hide it behind the cans of tuna and beef jerky that you’ve stored in the cabinet, and only bring that out if the zombies start to appear.”

Chipman also locked his Twitter account once his nomination was announced, preventing anyone from easily searching his past posts. 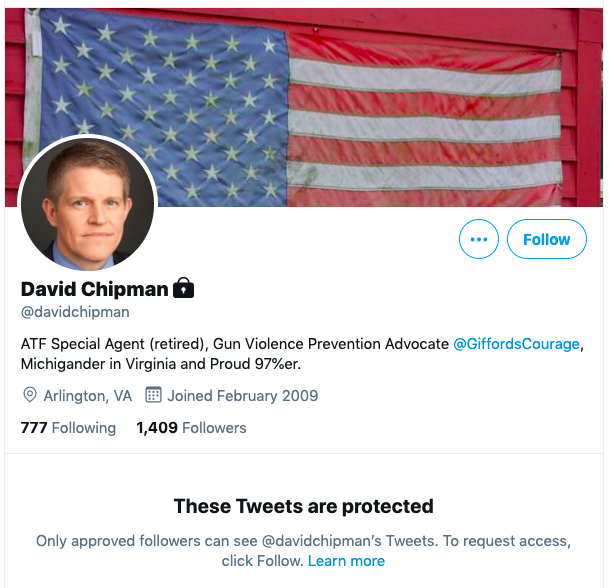