To Defeat Kavanaugh, NBC Declares War on the Truth and Ethics

If Twitter and Facebook are at all neutral, they may want to consider treating NBC news like they treat Alex Jones.  NBC seems to have given up all but the slightest pretenses of Journalism.

Let’s start with the fact NBC continues to run stories on Julie Swetnick.  The liberal paper of record has The New York Times passed on the Swetnick allegations because it did not meet journalistic standards.  Yet, NBC continues to put her groundless accusations on with disclaimers that they can’t verify it.  Well if you can’t verify it, why are you running it?

Ironically, one person who discredits Swetnick is Swetnick herself on NBC.  Some lowlights:

She also appeared to backtrack on her suggestion that Kavanaugh was involved in gang rapes, saying she only saw him congregated with other boys outside of rooms. . . .

She provided four names to NBC News that she said could confirm her descriptions of the parties in the 1980s. NBC News contacted all four: one said they did not remember a Julie Swetnick, one was dead, and two did not respond, per Snow.

Really, NBC?  Why did you put her on the air?  There is only one reason and it has nothing to do with journalism.

However, NBC may be looking for a new tactic as even their own research can’t corroborate Swetnick and any reputable journalist would not touch Swetnick's accusations.

So it is time for NBC to cook up something else.  Once again it is an allegation that The New York Times passed on because it did not meet minimum journalistic standards, those of Deborah Ramirez.  We won’t link to this but the basic allegation is that --Gasp-- somehow Kavanaugh was talking to former classmates before the groundless accusation went public.   But here is one breakdown of it.

Ramirez had been calling mutual friends for weeks looking for dirt on him. That's how we know that she had admitted she wasn't even sure it was Kavanaugh.

Here is Kavanaugh later in the same interview with the committee: 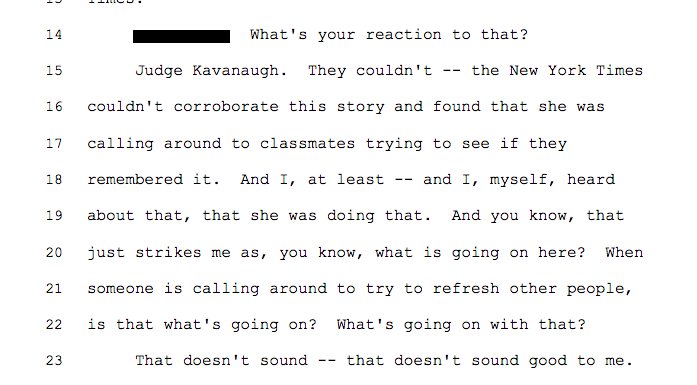 In other words, Kavanaugh had already heard and testified in the very same interview that Ramirez was calling around looking for dirt on him. He didn't know the specific allegation, but he had every reason to try to pre-empt something from her.

How does NBC print that article without acknowledging that the very same testimony they are citing included him mentioning he had heard about her having some accusation against him for weeks? Which explains why he was trying to pre-empt her accusation...

The fact of the matter is as the Senate Judiciary committee explains in a tweet thread:

The texts from Ms. Berchem do not appear relevant or contradictory to Judge Kavanaugh’s testimony. This appears to be another last-ditch effort to derail the nomination with baseless innuendo by Democrats who have already decided to vote no. 1/6 https://t.co/PoW9pug45N

In the texts, there’s no suggestion that Judge Kavanaugh made any effort to conceal anything or press anyone to say something untrue. This is just the latest ridiculous attempt to smear Judge Kavanaugh's good name. 6/6

To put it charitably it is hard to take NBC serious as journalists now.  The key to their editorial decisions seems to be does it potentially hurt Judge Kavanaugh, not if it is true or meets even minimum journalist ethic standards.