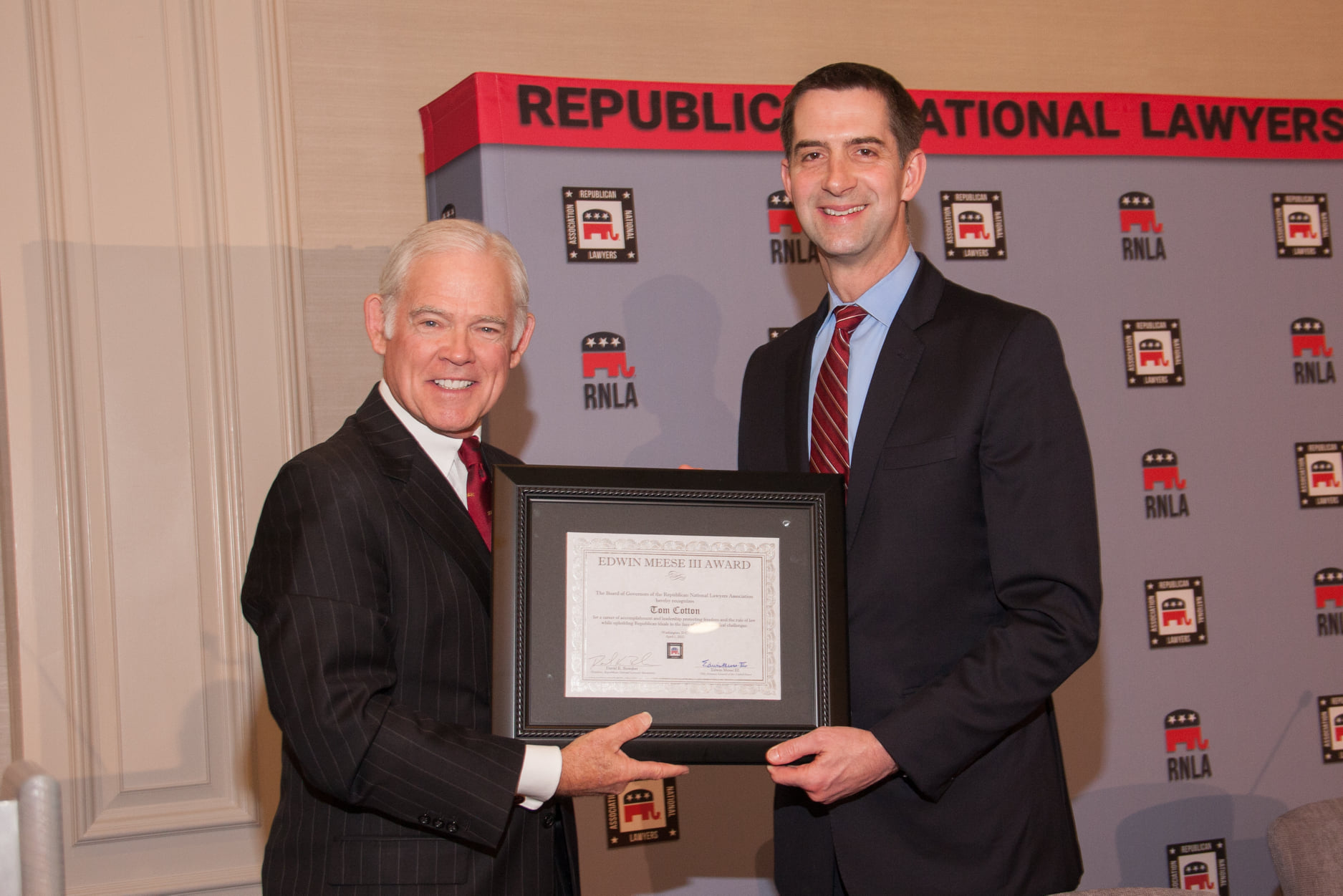 Senator Cotton was especially honored to receive the award during what he declared the "year of the Republican lawyer":

From state attorneys general, to the federal judiciary, to the highest court in the land, Republican lawyers are leading the charge for freedom in America today.

Republicans across the country are taking the fight to the far Left, putting criminals behind bars, challenging absurd mask mandates, defending our constitutional rights, protecting our kids from liberal ideologues at school, and finding brazen but well-funded attempts to gerrymander legislative maps and to rig the rules for our elections. This is vital work, and Republican lawyers are right at the center of it all.

Senator Cotton also emphasized the lasting effects that the Republicans have had on the federal judiciary.

The numbers speak for themselves. In four years from 2017 to 2020, Republicans confirmed 234 Article 3 judges. Many of whom, I would add, are very young—all of whom are very impressive. There will be an echo of those four years for decades to come, and it will protect the rights of all Americans. Despite the smears and lies from the far Left about some of these judges when they were nominees, we all stood strong, and now those judges are standing strong against Joe Biden’s assault on the rule of law.

After the recent Dobbs opinion leak, Senator Cotton was vocal in his denouncement of the leaker and the violent protests targeting conservative Justices.

The leaked opinion and illegal protests at justices’ homes shouldn’t be surprising.

When Democrats don’t get what they want, they try to destroy the institution. pic.twitter.com/H9ukRHs00o

If AG Garland continues to allow leftists to unlawfully harass Justices at their homes, the next Congress should take matters into its own hands with impeachment.

We agree with Senator Cotton: "We have to keep fighting in the spirit of Ed Meese and all the other fine men and women and great legal minds our party has produced." Senator Cotton has taken an unmovable stance in opposition to the Biden Administration's disastrous policies.

The only acceptable level of illegal immigration is zero. pic.twitter.com/nalbkWKOBD

If President Biden thinks it’s unethical for his staff to enrich themselves at the expense of the taxpayer, then why are his aides—many of whom have large amounts of college debt—designing a plan to transfer their debt to Americans who never went to college? pic.twitter.com/y3gejOnqKl

The Biden administration’s incompetence caused the nation’s formula shortage. Their response is too little too late. pic.twitter.com/cfnBcc6FgT

We are excited to see the lasting impact that Republican lawyers make as we head into the midterms. But we are not the only ones, Senator Cotton is looking at these midterm elections for whether he will run for President in 2024.

NEWS: Arkansas Sen. Tom Cotton met with two dozen donors at the Hay-Adams hotel in DC this morning - and told them a Trump '24 bid wouldn't deter him from running

Cotton said he was prepared to run, and would make a decision after the midtermshttps://t.co/vy4jEgSGIu