Today, the RNLA announced that it will give RNC Chief Counsel Justin Riemer the 2021 Robert J. Horn Chairman's Award during the National Election Law Seminar, which will be in Atlanta in August.  Justin expertly led the RNC's legal department through the tumultuous 2020 election season - helping to protect the integrity of elections throughout the country, keep the RNC in compliance with all applicable laws and regulations, and provide expertise on questions of campaign finance and election administration.  Justin has extensive experience with all aspects of elections and serves as a great asset to the entire Republican Party.

RNLA's leaders recognized his achievements, wisdom, and expertise in the press release announcing the award:

“Congratulations to Justin Riemer on winning the RNLA Chairman’s Award. As a member of the RNLA staff, an election official, and critical contributor to the RNC, he has consistently provided excellent legal services, with integrity, humility, and skill. We look forward to continuing to work with him for the good of the Party and the country for many years,” RNLA Chair Larry Levy said.

RNLA Executive Director Michael Thielen added: “I have viewed up close Justin’s leadership in election administration for over a decade. While at RNLA, he organized our National Election Law Seminar and co-authored our response to President Obama’s Commission on Election Administration, which he also testified on before the Senate. In my home state of Virginia, he effectively and fairly administered elections. At the RNC, he led the counsel’s office through the most difficult election cycle since the Democrat Jim Crow era and now is helping lead the RNC’s new Election Integrity efforts to make it easier to vote and harder to cheat. He is a worthy recipient of the Horn Award and Bob would be proud to have him in the RNLA family.”

RNLA President David Bowsher explained: “We are proud of all of the hard work that Justin, the rest of the RNC legal team, and other Republican lawyers nationwide did in the unprecedented elections of 2020."

As 2020 Chairman’s Award Winner and Lawyers Democracy Fund President Harvey Tettlebaum noted: “As a prior recipient of the Bob Horn Award, I congratulate Justin Riemer on his selection as the 2021 recipient of the Award. Justin performed masterfully as Chief Counsel of the Republican National Committee during a difficult Presidential election year. During an election year which did not end on November 10th, Justin provided timely and wise legal advice to protect the honesty and accuracy of all the elections, including those affecting the elections to the U.S. House and Senate. Justin’s commitment to fair, honest, and open elections has well served both the country and the Republican Party. His is a trusted voice of reason and competence during a time of unrest and political confusion. Justin is an example of what a Republican lawyer should be and should do. His commitment to ethical service in this regard should stand as example for others who will follow him either into government service (his prior employment) or Republican Party grass roots efforts.”

Justin has also been actively tweeting to respond to the left's distortions on election integrity.  For example: 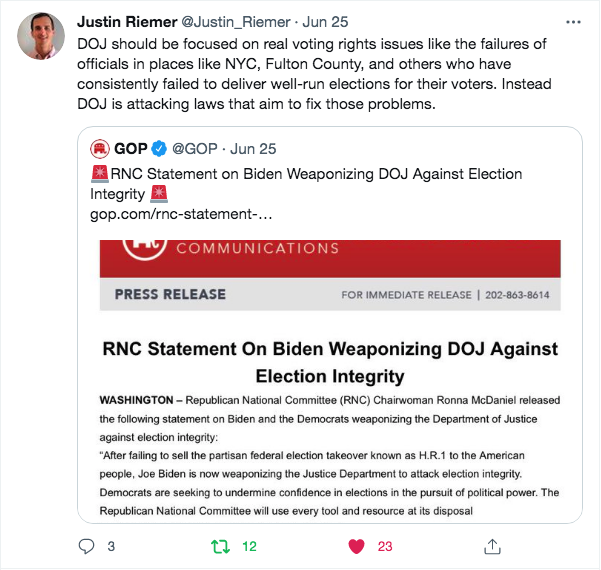