Even the Left is Tired of Marc Elias

In a recent Election Law Blog post, liberal Professor Rick Hasen said what everyone is thinking, but no one wants to admit. Even those on the left are getting tired of Democrat election lawyer Marc Elias (of Steele dossier infamy):

Marc is a controversial figure in the election law world, and he’s become something of an online bully, castigating those who disagree with him even on issues of strategy and tactics who might be natural allies. And once Marc attacks, he has 600,000 Twitter followers who follow suit and believe (thanks in part to some of Marc’s own posts and media appearances) that Marc is singlehandedly fighting against attempts to suppress votes and subvert election outcomes. (In fact, much of this work is done by voting rights lawyers, many without any affiliation with the Democratic Party.) I get lots of messages from election lawyers and professors complaining about Marc but reluctant to voice their criticisms publicly. . .

It is fine to be zealous in one’s advocacy, but one need not be an aggressive bully on social media or elsewhere.

Totally stand by my criticism of Brnovich, and my linked work in the post lays out the case. And people are anonymous because they are scared of crossing you. Some messages in the last 24 hours: https://t.co/maUAVQaLwS pic.twitter.com/shposfSwb6

"It is fine to be zealous in one’s advocacy, but one need not be an aggressive bully on social media or elsewhere." https://t.co/wHHCC6MYyK

As expected, the Elias Twitter trolls went after Hasen despite him being firmly on the left himself.

Apropos my statements yesterday (this is in response to my criticisms of Marc Elias's litigation strategy) pic.twitter.com/2y0mgc70Gx

Well after being called a drunk, someone with racist ideas, a tool of Russia ,and a supporter of fascism, and after being told I should read the Constitution (all today!), I think we've covered the entire landscape.
Have a lovely evening everyone. xo https://t.co/J6XtB1yh1V

Hasen's blog is just one context where Elias has drawn criticism in recent days.

Elias has been a harsh critic of alleged partisan gerrymandering in Republican-led states and has filed several lawsuits challenging their new political maps. In November, he filed a legal challenge to North Carolina’s Republican-approved congressional map, calling it a “grotesque partisan gerrymander,” “indefensible,” and proof the Republican Party “has lost all shame.”

“If hypocrisy has a face and a name, this is it,” Fair Maps Maryland spokesman Doug Mayer said in a prepared statement. “Nothing screams you don’t have a legal leg to stand on than bringing in high-powered, partisan attorneys to defend the indefensible.”

“If hypocrisy has a face and a name, this is it. . . Nothing screams you don’t have a legal leg to stand on than bringing in high-powered, partisan attorneys to defend the indefensible.” https://t.co/f2rtA7meae

Of course Elias' hypocrisy has been going for years and started being called out last year by moderate Democrats.  As CNN reported last year in an article entitled House Democrats face backlash on both sides for investigating Iowa House race won by a Republican (emphasis added):

The House Administration Committee. . . just opened an investigation into Iowa's 2nd Congressional District election results where Republican Rep. Mariannette Miller-Meeks defeated Democrat Rita Hart by only six votes. Hart's campaign, who has retained Democratic election lawyer Marc Elias for the matter, is calling for an investigation into 22 ballots, which they believe were not counted correctly for various reasons, and if recounted, would change the outcome of the election.

Moderate Democratic Rep. Dean Phillips of Minnesota tweeted against his own party's actions and any attempt to try to overturn the race that was certified in favor of Republicans.

"Losing a House election by six votes is painful for Democrats. But overturning it in the House would be even more painful for America. Just because a majority can, does not mean a majority should," Phillips tweeted Monday.

But the last straw may have been when Elias questioned the media, likely in response to a dark money story in the New York Times.

Hopewell also sponsored a project called Democracy Docket Legal Fund that filed lawsuits to block Republican-backed voting restrictions enacted across the country. It was led by a top Democratic Party election lawyer, Marc E. Elias. His firm at the time, Perkins Coie, was paid $9.6 million by Hopewell, according to tax returns, and another $11.6 million by the Biden-backing Priorities USA nonprofit group.

He received flak from conservatives and liberals alike for a tweet arguing that First Amendment jurisprudence should be changed to be harsher on the press simply because he doesn't think they're doing a good enough job promoting his viewpoints. Fox News wrote:

Top Democrat lawyer Marc Elias was accused of posing a "dangerous threat to free press" on Sunday after he called for the Supreme Court to revisit its landmark defamation ruling in New York Times v. Sullivan.

In a since-deleted tweet, Elias declared that "If the media is not going to be pro-democracy, then it probably is time for the courts to revisit New York Times v Sullivan (as conservative lawyers suggest). The case was premised on a role in democracy that the mainstream press seems increasingly disinterested in playing."

Elias, who rose to prominence on the left as the Democrat's most aggressive election lawyer, wondered whether the strong legal protections afforded to the press in the 1964 Supreme Court ruling should be revisited. The ruling affirmed the threshold for defamation lawsuits and established the "actual malice" standard for public figures, restricting the ability for government officials to sue the press for defamation under the First Amendment.

Elias eventually deleted the tweet, claiming in a subsequent post that it was just a "test" to prove whether people care more about protecting the media's First Amendment rights "than the rights of voters." But reporters weren't buying it. 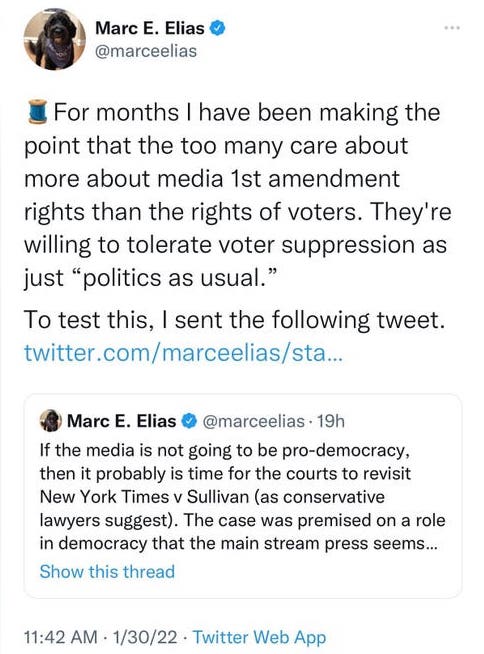 While Elias has amassed an army of far-left Twitter trolls to defend him (even against people who should be their allies), the reality is even mainstream Democrats and liberals are sick of his hypocrisy and bullying.